My experiment with the Tambour needle.

Tambour needle is the same as arhi or the cobbler's needle that is used extensively in Indian embroidery. It makes only one type of stitch - the chain stitch. For a long time I have had this desire to learn to use the tambour needle. So I bought myself a kit and began experimenting with it. I imagined that I would be sipping hot tea, listening to music, and working at ease at my homemade tambour frame. On the contrary, I was barely able to hold the thread in my left hand and twist the needle with the right! Eventually I did succeed, minus the tea and the music of course! 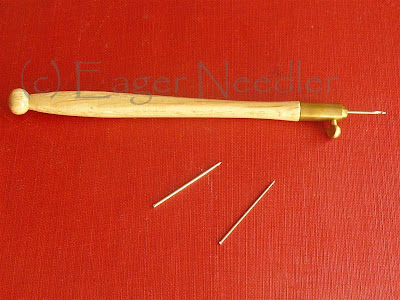 This is the tambour kit. It came with three needles of different sizes and an instruction sheet. The screw is used to change the needles.
Last weekend, I sat down to embroider a small design using the arhi, mostly to see if I would last that long. Here is the result. Initially it was a little challenging but when I was about halfway done, I actually started loving it! 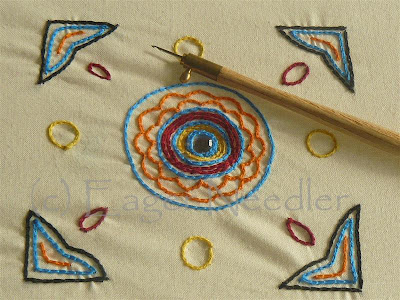 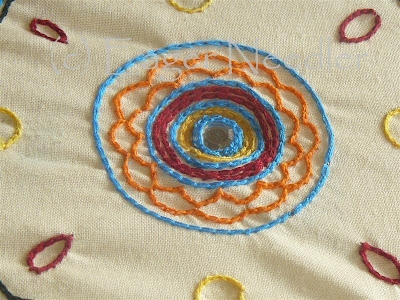 In India, arhi was originally used in the states of Gujarat and Kashmir. Now it is used by craftsmen in other states as well. In Gujarat it is believed to have started by the Mochi community (Mochi being cobbler), which primarily stitched shoes with similar needles. This technique seems to have been passed on to the Ahir community which became quite well known for their Kutchi Bharat. Their work is quite stunning! I have some samples and I will post them in a few days. Generally speaking, embroideries from Gujarat are bright with mostly primary and secondary colors (Blue, red, yellow, orange, green and purple). However, white and black are also used in Kutchi Bharat. The chain stitch is very small and is done using either cotton or silk threads (I can't imagine working with silk thread without damaging it). Arhi work can be seen on clothing, bed linen, wall hangings, letter holders, bags and so on.
In Kashmir, the embroidery done with the arhi is called Kashmiri Kashidas and quite different from the arhi work of Gujarat. The designs are mostly paisley and the thread colors, lighter. Crewel wool is used instead of cotton and silk. I will post a separate article on Kashmir embroidery so you can see the difference. 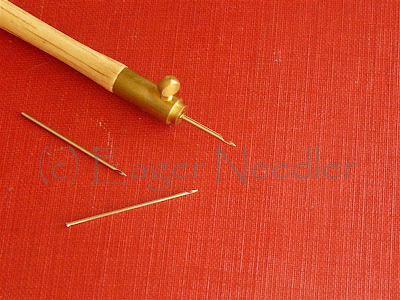 Lastly, my thoughts on the Tambour: There is a learning curve in using a tambour needle, no doubt about it. But once you cross that, it is great for working large pieces of embroidery and fast. Tambour means drum (I think in French!). It is rightly named for a frame, because the fabric has to be held as tight as a drum in order to embroider with ease. It is best if you use a frame so you have both hands free. If you choose to work with a hoop, make sure that the fabric is taut and that you can rest the hoop somewhere so that both hands are free (it is not impossible, but will slow you down).
Try it -you'll enjoy the experience!
at November 14, 2009
Email ThisBlogThis!Share to TwitterShare to FacebookShare to Pinterest

Hi Sukanya,
I came across your experience with Tambour needle. I am currently learning Zardozi work in India & was wondering about Arhi work. The Arhi needle that I bought here looks different that the one in your article. Could you please shed some light on that? It would be very helpful information.
Thanks in advance!

Thanks for your comment. Regarding your question about the Tambour needle, I have not seen the needles available in India. I bought mine in the U.S. Hence it may be different from the one you have. That said, it takes a few attempts to master the skill with any needle. Just keep at it and you'll figure it out.
If you have any other questions, please feel free to write to me.

Thanks Sukanya!
I am going back to the US in couple of weeks...since I come to India on vacation.

Could you please suggest the size of tambour needle used for Arhi work? Also, I am assuming that you use a frame to stretch the cloth to do this work. What size frame would you recommend for someone like me who likes to do Zardozi & Arhi work as a hobby?


Sorry for asking so many questions, but I really love this form of embroidery! Thanks again.

It is nice to hear from you again. I apologize for not getting back sooner. My kids are at home for the summer break!!:)
Regarding the needle for Arhi work, the size will depend on the size of the thread/fabric you use. Choose very thin needles for silk or other fine fabrics. I bought a set of three needles (in different sizes) from Hedgehog handworks and just experimented with them. http://www.hedgehoghandworks.com/catalog/tools_tambour.php Now, about the frame,I did not buy a frame as such. So I cant advice you much on it. I know that there are frames available online and some of them tend to be a little expensive. I used the frame of an old chair for my initial experiments.
You can e-mail me at Eagerneedler@gmail.com anytime.
Again I apologize for the delay in writing back.

Thanks Sukanya for the information AND for the inspiration.
Appreciate it very much!! Don't worry about the delay...that's perfectly fine.

Thank you for finding Eager Needler in the vast blogosphere! I hope you find the articles useful. Please take the extra few seconds to leave your comments! Feedback is a powerful motivator!